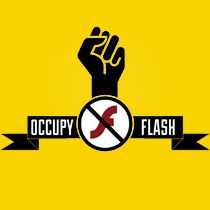 Occupy Flash is probably one of the dumbest movement I’ve seen in a while. Don’t get me wrong, I fully understand that choosing Flash for web development is not exactly the best choice you can make. The problem is that this campaign is totally useless and it’s probably more harmful than good.

You can’t simply start a campaign stating that Flash has become useless and then ask the user to uninstall it from his computer, this will NOT make a better world. Truth is, Flash is not holding anyone or anything back. You (as a web developer) don’t want to use it? Then just don’t, this will be a much stronger statement than uninstalling it from your mom’s computer.

It’s one thing to try to explain to someone technical the strain that Flash can put on a computer, but trying to explain this to a non-technical person just won’t work. Flash is still being used quite a lot here and there and HTML5 fallbacks (for the lack of a better word) are not always present.

What’s the point of asking people to uninstall Flash…really? It will only make the experience worse and in no way improve it. It’s true that it’s sometime needed to ask people to upgrade. And upgrade is the keyword, if you take Internet Explorer 6 or 7 for example, these are really hurtful for the web and this really hold us back. But Flash? It’s optional! You can be sure that if you uninstall it today you’ll be pissed as hell.

We do not need another movement to raise awareness around Flash, the ones who can really make a difference are the ones who make the web. These people already know all the ups and downs of Flash and if they don’t they shouldn’t be in the industry.

Just work the other way around, instead of asking users to uninstall Flash, ask developers to stop supporting it, but then again, we all know it.